Adult attention-deficit/hyperactivity disorder (ADHD) is a mental health disorder that includes a combination of symptoms, such as difficulty paying attention, hyperactivity and impulsive behavior. Adult ADHD can lead to poor work or school performance, unstable relationships, low self-esteem, and other problems.

Symptoms generally start in early childhood and continue into adulthood. In some cases, ADHD is not recognized or diagnosed until the person is an adult. Adult ADHD symptoms may not be as clear as ADHD symptoms in children. In adults, hyperactivity may decrease, but struggles with impulsiveness, restlessness and difficulty paying attention may continue. 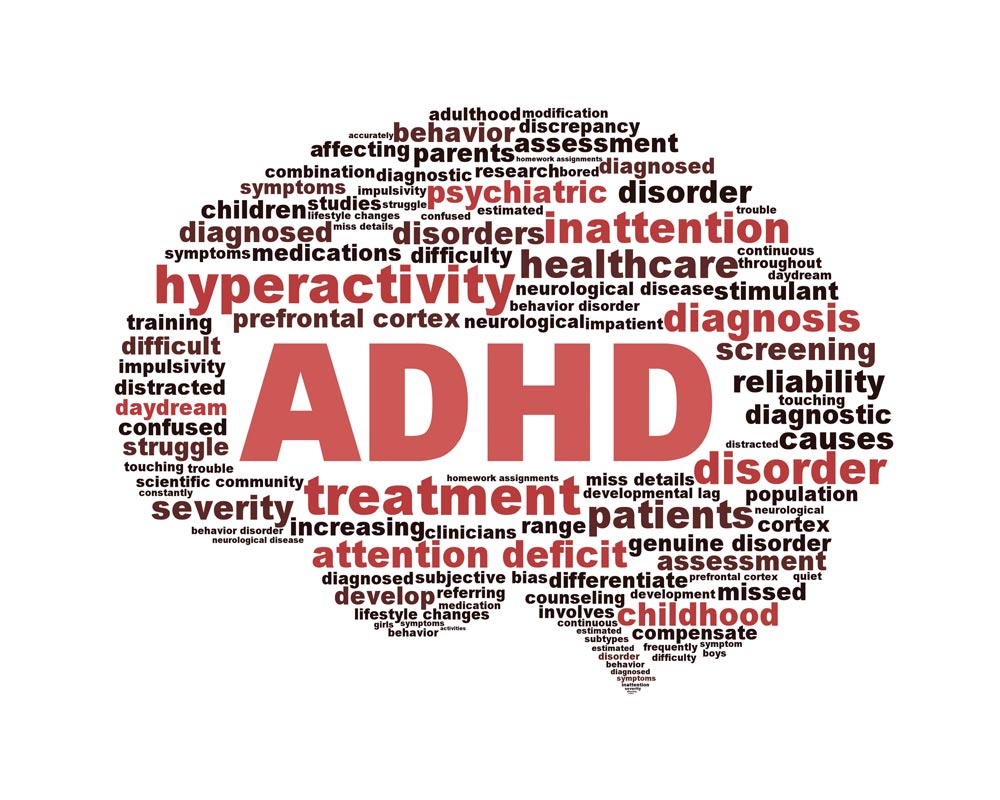 Some people with ADHD have fewer symptoms as they age, but some adults continue to have major symptoms that interfere with daily functioning. In adults, the main features of ADHD may include difficulty paying attention, impulsiveness and restlessness. Symptoms can range from mild to severe.

Many adults with ADHD aren’t aware they have it  they just know that everyday tasks can be a challenge. Adults with ADHD may find it difficult to focus and prioritize, leading to missed deadlines and forgotten meetings or social plans. The inability to control impulses can range from impatience waiting in line or driving in traffic to mood swings and outbursts of anger.

Adult ADHD symptoms may include:

Almost everyone has some symptoms similar to ADHD at some point in their lives. If your difficulties are recent or occurred only occasionally in the past, you probably don’t have ADHD. ADHD is diagnosed only when symptoms are severe enough to cause ongoing problems in more than one area of your life. These persistent and disruptive symptoms can be traced back to early childhood.

Diagnosis of ADHD in adults can be difficult because certain ADHD symptoms are similar to those caused by other conditions, such as anxiety or mood disorders. And many adults with ADHD also have at least one other mental health condition, such as depression or anxiety.

When to See a Doctor

If any of the symptoms listed above continually disrupt your life, talk to your doctor about whether you might have ADHD.

Seek a provider who has training and experience in caring for adults with ADHD.

Risk of ADHD may increase if:

While the exact cause of ADHD is not clear, research efforts continue. Factors that may be involved in the development of ADHD include:

ADHD can make life difficult for you. ADHD has been linked to:

Although ADHD doesn’t cause other psychological or developmental problems, other disorders often occur along with ADHD and make treatment more challenging. These include:

Mood disorders. Many adults with ADHD also have depression, bipolar disorder or another mood disorder. While mood problems aren’t necessarily due directly to ADHD, a repeated pattern of failures and frustrations due to ADHD can worsen depression.

Signs and symptoms of ADHD in adults can be hard to spot. However, core symptoms start early in life  before age 12  and continue into adulthood, creating major problems.

Physical exam, to help rule out other possible causes for your symptoms

Information gathering, such as asking you questions about any current medical issues, personal and family medical history, and the history of your symptoms

Other conditions that resemble ADHD

Some medical conditions or treatments may cause signs and symptoms similar to those of ADHD.

Mental health disorders, including mood disorders such as depression or anxiety, conduct disorders, learning and language deficits, or other psychiatric disorders.

Drugs and medications, such as alcohol or other substance abuse and certain medications.

Standard treatments for ADHD in adults typically involve medication, education, training and psychological counseling. A combination of these is often the most effective treatment. These treatments can relieve many symptoms of ADHD, but they don’t cure it. It may take some time to determine what works best for you.

Talk with your doctor about the benefits and risks of any medications.

Stimulants, such as products that include methylphenidate or amphetamine, are typically the most commonly prescribed medications for ADHD, but other drugs may be prescribed. Stimulants appear to boost and balance levels of brain chemicals called neurotransmitters.

Other medications used to treat ADHD include the nonstimulant atomoxetine (Strattera) and certain antidepressants such as bupropion (Wellbutrin, others). Atomoxetine and antidepressants work slower than stimulants do, but these may be good options if you can’t take stimulants because of health problems or a history of substance abuse or if stimulants cause severe side effects.

The right medication and the right dose vary among individuals, so it may take time to find out what’s right for you. Tell your doctor about any side effects.

Counseling for adult ADHD generally includes psychological counseling (psychotherapy), education about the disorder and learning skills to help you be successful.

Psychotherapy may help you:

Common types of psychotherapy for ADHD include:

Cognitive behavioral therapy. This structured type of counseling teaches specific skills to manage your behavior and change negative thinking patterns into positive ones. It can help you deal with life challenges, such as school, work or relationship problems, and help address other mental health conditions, such as depression or substance abuse.

Marital counseling and family therapy. This type of therapy can help loved ones cope with the stress of living with someone who has ADHD and learn what they can do to help. Such counseling can improve communication and problem-solving skills.

If you’re like many adults with ADHD, you may be unpredictable and forget appointments, miss deadlines, and make impulsive or irrational decisions. These behaviors can strain the patience of the most forgiving co-worker, friend or partner.

Therapy that focuses on these issues and ways to better monitor your behavior can be very helpful. So can classes to improve communication and develop conflict resolution and problem-solving skills. Couples therapy and classes in which family members learn more about ADHD may significantly improve your relationships.

There’s little research to indicate that alternative medicine treatments can reduce ADHD symptoms. However, one recent study indicates that mindfulness meditation may help improve mood and attention in adults who have ADHD, as well as those who don’t have ADHD.

Before using alternative interventions for ADHD, talk with your doctor about risks and possible benefits.

Attention-deficit/hyperactivity disorder (ADHD) is a chronic condition that affects millions of children and often continues into adulthood. ADHD includes a combination of persistent problems, such as difficulty sustaining attention, hyperactivity and impulsive behavior.

Children with ADHD also may struggle with low self-esteem, troubled relationships and poor performance in school. Symptoms sometimes lessen with age. However, some people never completely outgrow their ADHD symptoms. But they can learn strategies to be successful.

While treatment won’t cure ADHD, it can help a great deal with symptoms. Treatment typically involves medications and behavioral interventions. Early diagnosis and treatment can make a big difference in outcome.

The primary features of attention-deficit/hyperactivity disorder include inattention and hyperactive-impulsive behavior. ADHD symptoms start before age 12, and in some children, they’re noticeable as early as 3 years of age. ADHD symptoms can be mild, moderate or severe, and they may continue into adulthood.

ADHD occurs more often in males than in females, and behaviors can be different in boys and girls. For example, boys may be more hyperactive and girls may tend to be quietly inattentive.

There are three subtypes of ADHD:

A child who shows a pattern of inattention may often:

A child who shows a pattern of hyperactive and impulsive symptoms may often:

In addition, a child with ADHD has:

Most healthy children are inattentive, hyperactive or impulsive at one time or another. It’s normal for preschoolers to have short attention spans and be unable to stick with one activity for long. Even in older children and teenagers, attention span often depends on the level of interest.

The same is true of hyperactivity. Young children are naturally energetic  they often are still full of energy long after they’ve worn their parents out. In addition, some children just naturally have a higher activity level than others do. Children should never be classified as having ADHD just because they’re different from their friends or siblings.

Children who have problems in school but get along well at home or with friends are likely struggling with something other than ADHD. The same is true of children who are hyperactive or inattentive at home, but whose schoolwork and friendships remain unaffected.

When to see a doctor

If you’re concerned that your child shows signs of ADHD, see your pediatrician or family doctor. Your doctor may refer you to a specialist, but it’s important to have a medical evaluation first to check for other possible causes of your child’s difficulties.

While the exact cause of attention-deficit/hyperactivity disorder is not clear, research efforts continue. Factors that may be involved in the development of ADHD include:

Risk factors for attention-deficit/hyperactivity disorder may include:

Although sugar is a popular suspect in causing hyperactivity, there’s no reliable proof of this. Many issues in childhood can lead to difficulty sustaining attention, but that’s not the same as ADHD.

ADHD doesn’t cause other psychological or developmental problems. However, children with ADHD are more likely than others to also have conditions such as:

In general, a child shouldn’t receive a diagnosis of attention-deficit/hyperactivity disorder unless the core symptoms of ADHD start early in life  before age 12  and create significant problems at home and at school on an ongoing basis.

There’s no specific test for ADHD, but making a diagnosis will likely include:

Although signs of ADHD can sometimes appear in preschoolers or even younger children, diagnosing the disorder in very young children is difficult. That’s because developmental problems such as language delays can be mistaken for ADHD.

So children preschool age or younger suspected of having ADHD are more likely to need evaluation by a specialist, such as a psychologist or psychiatrist, speech pathologist, or developmental pediatrician.

Other conditions that resemble ADHD

A number of medical conditions or their treatments may cause signs and symptoms similar to those of ADHD. Examples include: